Accuracy Report
How to Use ROI Reporting
Period vs. Globally Unique Callers

All three versions of this route will work the same way (either the agent is available to answer or the caller will be routed to voicemail).  Depending on advanced settings for each of your route the caller may have a slightly different experience.

In the example of Version 3: if the queue has waiting messages and does not have a “bypass queue when an agents aren’t available” enabled the caller wait based on your queue’s settings before being routed to voicemail.  If you have multiple agents schedules each with different schedules, each agent’s individual schedule will be used to determine where the call goes.

In this example the schedules have been applied to multiple part of the call route.  A “business hours” schedule has been applied to the tracking number and another schedule for one of the two agents in the queue. 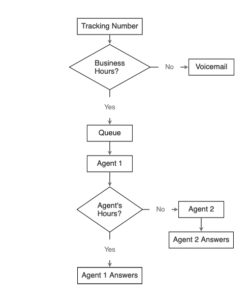 Back to top
 Leave Feedback