Guest post by Tony Chopp, Founder of Claim Your Space

On Monday July 25th, 2016, Google announced that we could expect “…more powerful bid automation with new AdWords Smart Bidding,” and search marketing managers across the land wondered what it all meant. It’s been over 3 years since then and I don’t think any of us could’ve imagined just how much this change would mean.

Before the introduction of bid automation, a large portion of time was dedicated to setting CPC bids. Setting them, adjusting them. Pushing them up for higher ad position and more search impression share. And pulling them down for lower cost-per-lead and higher ROAS. Watching for new competitors and adjusting accordingly. Finding the right mix that worked in a particular marketplace and for an individual client.

It was a continuous, never-ending endeavour.

And since the introduction of these tools, I can’t say necessarily that things are easier, but they are different. Let’s take a closer look at how smart bidding works, and how you can make Google Ads work with CallTrackingMetrics to automate for high value conversions.

The Magic of Target CPA

One of the first smart bidding options introduced was Target CPA, which sets bids to help get as many conversions as possible at or below the target cost-per-action (CPA) you set using machine learning. And it’s grown to behave almost as magical as it sounds. You can determine your financial funnel model by understanding conversion rate to sale and average-order-value, then input a Target CPA, and let Google do the rest.

Read More: Why Use Google’s tCPA and How to Migrate to It

It’s not entirely foolproof, but it really can work. One thing to note is that the more conversion data you feed into Google, the more likely you are to get good results. So we started working tirelessly to find ways to measure as many conversions as possible.

Here’s a scenario. You have a client, and they run Google Ads. It’s a lead generation project, and historically you’ve measured a form fill as a lead.

The trick to get smart bidding to work is getting enough conversion data. Google recommends at least 30 conversions per month for Target CPA, but in practice I find that may even be generous.

So what if you aren’t generating 30 form fill conversions per month?

A great logical next move is to start measuring phone calls as leads using CallTrackingMetrics. And for all of our lead gen projects that were using live chat on their website, we made sure we started measuring those as well.

The idea isn’t novel, but it was in some cases for paid search projects, because we always wanted our cost-per-lead to reflect something that was truly a lead.

As we worked to expand the number of measurements we were taking in, and consequently started measuring things that were further from an actual lead (think: time-on-site goals, smart goals, page view goals), in some cases the number that we historically talked about all the time—cost-per-lead—began to mean something different.

We got the bid automation to do our bidding. But we introduced more uncertainty into some of our client conversations as a result.

The new Google Ads UI gave a nice way to get those client conversions back on track. We now had access to a table to break about the individual conversions: 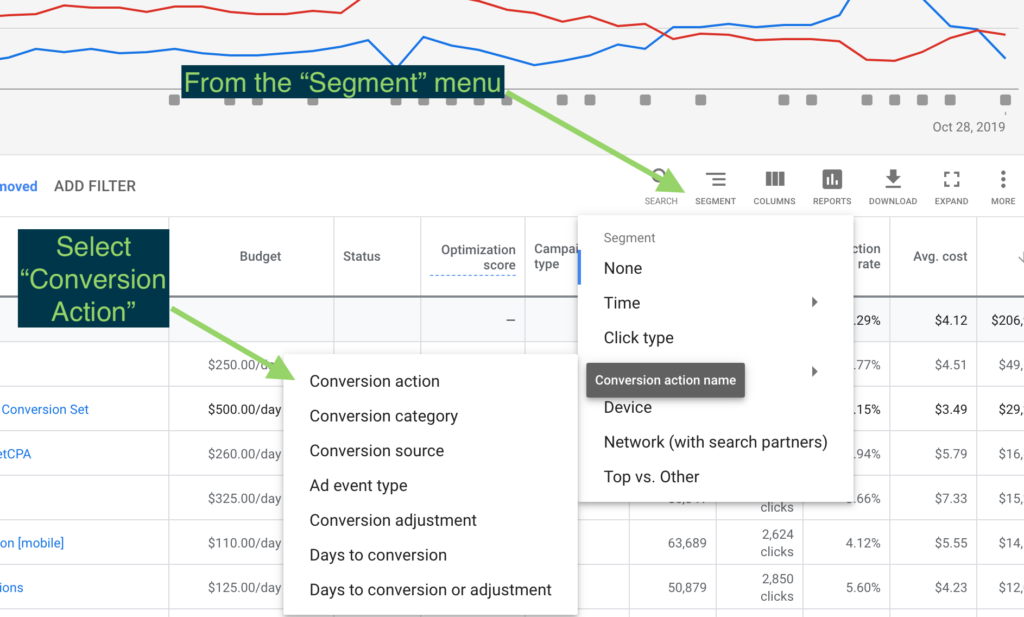 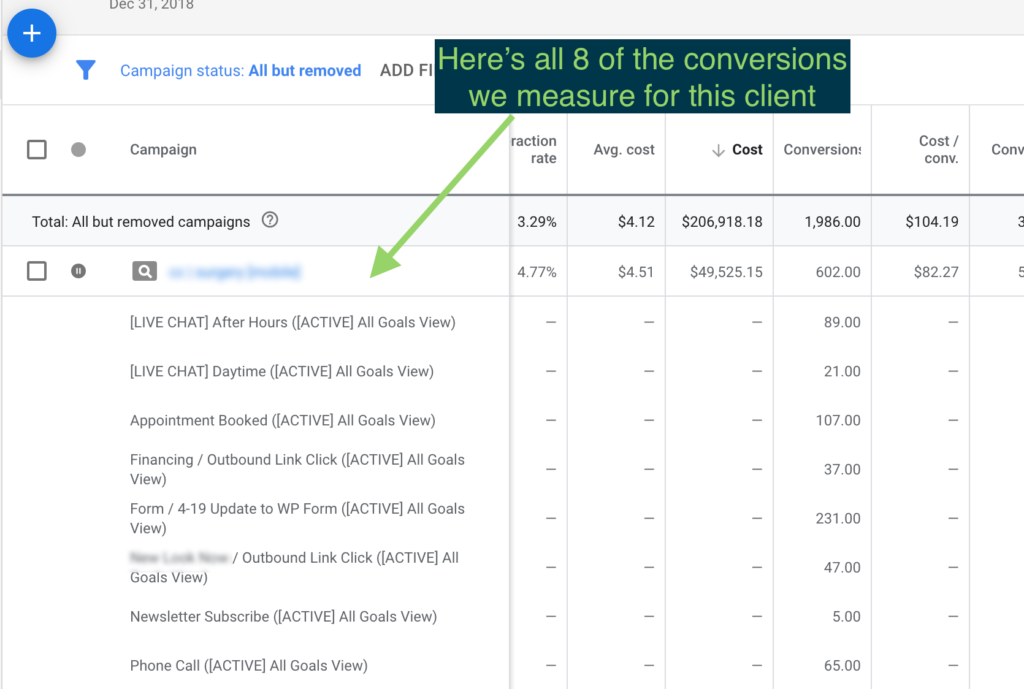 While before we were only measuring form fills, now we had a way to keep having that conversion and keep feeding Google more data about a broader set of interactions that were valuable for the business to contribute to our overall learning goals and targets.

Some Conversions Are Better Than Others

In a previous post I wrote for the CallTrackingMetrics blog, I talked about how we were able to use info gathered during an actual call to get better eyes on our analytics. We trained call center reps to make an input in CTM when an appointment is booked during a phone call.

And that’s a big deal. Because while we love measuring all of these conversions for this client, that one—an appointment booked–is by far the most valuable (and easiest to understand the value of). 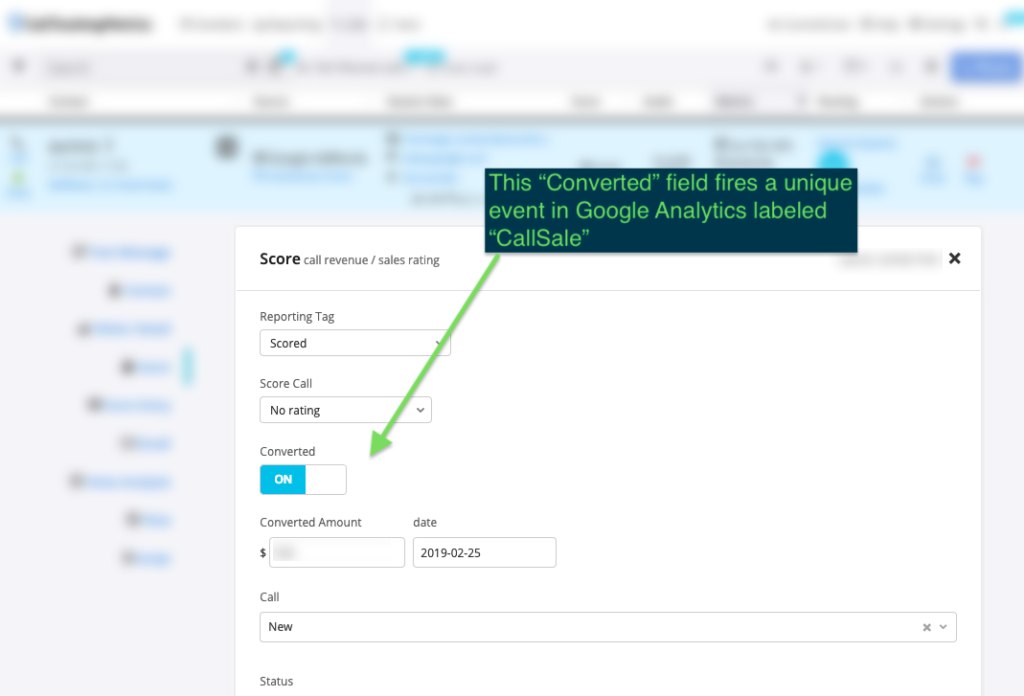 Overall we were quite pleased with the setup. The account was rolling. We could get to the data we wanted to see in all of our reporting. But it had been in the back of our mind for some time: “Hey, too bad we can’t tell Google this conversion is the most important, and to put more weight on it.”

Yet, ask Google and you shall receive!

Introduced this year at Google’s annual Marketing Live event was just what we had been hoping for. The ability to do two things: 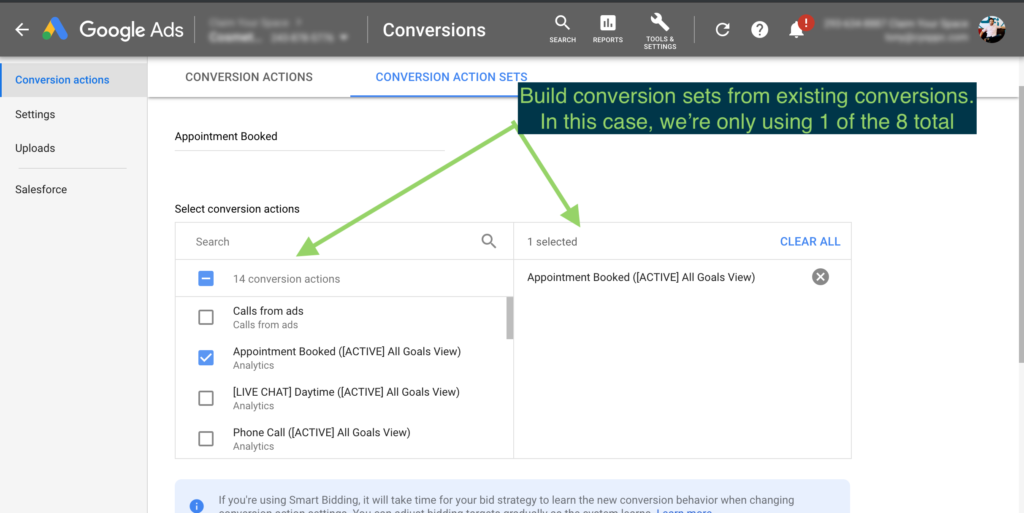 The combination of all of these factors over the last three years has lead to surprising results. Earlier this year, I built a campaign that had a structure that I wouldn’t have dreamed up using in early 2016.

I had one keyword in it. The keyword is broad matched. It’s using conversion set bidding, focused on that “Appointmented Booked” conversion.

It started strong. Very strong. And after 5 months running, it’s performing so well that it’s setting record lows for cost-per-appointment, and setting record highs for appointment volume per month.

Most exciting is how this is allowing us to scale out the account geographically in ways that we never thought were going to be possible.

Don’t Set It and Forget It

Part of me wishes there was a magic bullet that always worked in Google Ads. But another part of me knows there isn’t (yet) and that’s actually good, because that means I still have work.

This is for sure one of those cases. I have tried this strategy in other accounts (and even within other campaigns in this account) and got less excellent results.

The moral of the story is the same as it always is for Google Ads: Test and measure. Check things frequently. Understand what normal, good, and bad looks like for your account. And don’t, do not…set it and forget it. 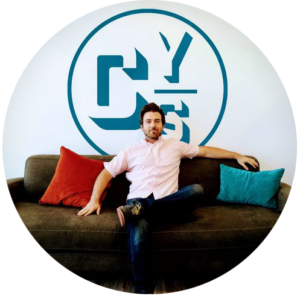 About 80 percent of consumers still would rather resolve their issues with a live agent over the phone.

Why should I integrate call tracking with Salesforce?

Salesforce is an incredibly powerful tool that many of our customers are using, and we're proud to have a complex integration with it.

Craft ad copy that grabs your reader's attention and makes it irresistible to click-through.