Gisele Anderson, Vice President of Captain Dave’s Dolphin and Whale Watching Safari, first discovered CallTrackingMetrics on the recommendation of their agency partner managing their paid advertising efforts. Based in Dana Point, California, Capt. Dave’s offers top-rated dolphin and whale watching cruises aboard unique catamarans, with exclusive features such as underwater viewing. They manage dozens of inbound phone calls daily from hopeful tourists seeking information about the tours and to make reservations. Anderson and her team wanted to know which of their advertising channels—from Facebook to Google to Bing—were delivering the highest number of phone conversions and therefore the greatest return on investment.

“About half of our customers call to make reservations on the phone,” Anderson shared, “while many call in to get information and then book online on their own.” Anderson wasn’t familiar with call tracking at the time and, before CallTrackingMetrics, would monitor what channels contributed to online bookings through Google Analytics and ask people on the phone about how they found out about their business.

It wasn’t until they hired the agency to support their paid advertising efforts that she learned about CTM. “They immediately said ‘We’re dialing you into CallTrackingMetrics so you can start tracking your calls’.” They started with about a dozen numbers that they allocated to different campaigns across Google, Facebook, Yahoo, Bing, and other channels so they could track which sources were contributing to phone calls and conversions for the tours.

Anderson was blown away by the results. “I was fascinated to see the actual results of our various campaigns. Programs that I had previously thought were not successful, were driving bookings in a way I wouldn’t have expected. CallTrackingMetrics tells us a different story about the sources that drive people who prefer to make reservations over the phone. It’s also dramatically changed the way we advertise and how we spend our money.”

“On Google Ads, for instance, I never thought it was important to do a Google Ad on the name of our company, because I thought, it’s the name of our company, we come up number one. Why would I spend hundreds of dollars or more a month when if people are Googling our name, they’re obviously searching for us? But our competitors were placing ads on our keywords featuring heavy discounts, and we were losing business by no longer being the number one position. It is now my number one spend, because I’ve discovered through Google Analytics and CallTrackingMetrics that it’s our number one return on the dollar.”

As Anderson and her team became more familiar with the CallTrackingMetrics software, she realized she could utilize some of the call recordings to manage her team and provide better customer support.

“Initially, I wanted to be able to listen to calls to learn more about our customer’s experience or step in if there were any issues. Our main number was not a CallTrackingMetrics number, so the majority of the calls went unmonitored. Well, it didn’t take me long—not more than a month—to realize that everything should be recorded and I wanted CallTrackingMetrics to be our central dashboard for all of our calls.”

Anderson ported the company’s main line over to CallTrackingMetrics and ditched their former hard phone and provider—saving the company hundreds of dollars in hardware costs. Now, her team of 5 agents (all of whom respond to calls and work off-site from home) are able to manage everything through CallTrackingMetrics’ softphone and cloud-based platform.

“I can keep track of how my agents are performing on calls by going into the platform and pulling a report, any time of day or night,” said Anderson. She added, “I used to pay someone twenty hours a month to compile reports that are now included on CallTrackingMetrics. I like to monitor how many calls came in, how many were repeat versus new callers, which of my agents secured what bookings, you name it. We used to spend so much time and money to pull this data together manually, and so to suddenly have this reporting system—it’s like gold.”

When Anderson officially ported over their main number and started recording all of the company’s phone calls, she faced some initial hesitation from her team answering phones. “They went from feeling very autonomous, to now feeling watched. It was important to clarify that the call recordings would benefit them as well.”

Anderson established a compensation program based on the number of conversions agents would make on unique calls that came in. Before that, she shared with her team that in order for her to equip them and set them up for success, she needed to really understand where they felt limited and where they needed to be empowered. So she asked agents to each day send her a 1-star call and a 5-star call: a 1-star call being one where the agent felt they could have performed better had they had better tools, more authority, etc., and a 5-star call being one that went well, with the understanding that she may repurpose those calls down the road when they brought on new employees. 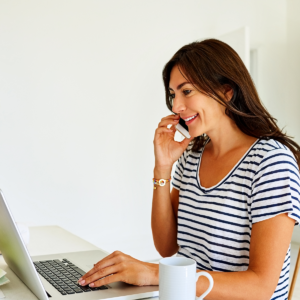 “I shared that I wouldn’t listen to anything else, and that got them very comfortable and they began to see the value of recording the calls. Now I had visibility into what they needed to be trained on and had something to go off of, as we worked together to improve from a 25% conversion rate, to a 35% conversion rate, with an ultimate goal of 50% conversion rate.”

The call recordings are an essential part of Anderson’s training toolkit as she now has a library of 1-star and 5-star calls to reference. When a new person is hired, they can go into the system and listen to past recordings, and Anderson can coach them on how she would have responded differently. Since the CallTrackingMetrics call log also allows for live listening, Anderson will occasionally go into the software and answer calls herself. “My team enjoys hearing me answer calls and seeing how I interact with customers. It beats role playing.”

The greatest benefit, Anderson shares, is having full transparency into what’s communicated on phone calls with customers.

“We would have customers say, ‘I was told this,’ and I would reply, well we do record our calls and I can go back and see what you were told and we will absolutely honor whatever you were told. Then they’d go, ‘Oh no, that’s okay, never mind.’ That alone is worth the price of CallTrackingMetrics!” joked Anderson.

Anderson and her team continue to discover more value with CallTrackingMetrics as they explore additional features on the platform. They’ve recently implemented text messaging as a way to layer in follow-up communications with customers. For example, if one of her agents senses on a call that a customer is price-sensitive and doesn’t book, the agent can go in and trigger an automated text message that will offer the customer a 20% discount. It’s an opportunity to re-engage with and capture more customers, especially in a competitive tourism field.

Watch Webinar: Go Beyond the Phone Call: Ways to Engage Customers with Texting

They are also working on implementing FormReactor to capture form submission conversion data on their website. CallTrackingMetrics can ultimately become the “one stop shop” for all of Capt. Dave’s communication channels—from phone calls to texts and forms—and will be on hand to support their growth in the years to come.

Whether you're looking for a dinner recipe, concert tickets, or helping your kids with their homework, all you need to do is "google it" and within seconds you have the world at your fingertips.

10 Ways to Save Money & Increase Value with CTM

How important is call tracking in the world of digital marketing?

We find that digital marketing agencies are particularly well-served by our platform. They're able to pick and choose from a robust feature set that supports their business model extremely well. Jason Smith, a senior member of our sales team, has spent the last few years helping digital marketers get the most out of CallTrackingMetrics.